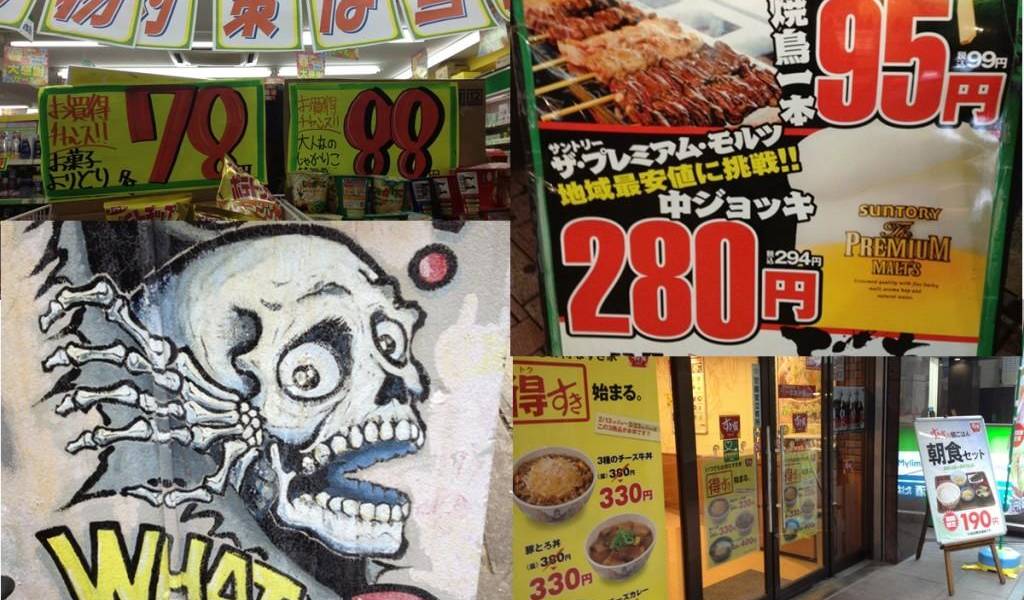 ‘Polite’, ‘clean’, ‘tasty’, ‘pleasant’ and ‘safe’ aren’t words that fit together nicely with ‘cheap’. You’re probably expecting words like ‘nasty’, ‘seedy’, ‘dangerous’, ‘dirty’ and ‘low quality’—but that’s the beauty of being a cheapo in Tokyo. Lots of Japanese businesses have figured out how to offer their goods and services on the cheap without sacrificing the levels of quality and service that Japanese consumers have come to expect.

Moreover, as everyone knows, Japan’s economic star doesn’t shine quite as brightly as it once did and people are no longer willing to hand over loads of cash just for the hell of it. Don’t be fooled by novel reports of hideously expensive square watermelons or beer fed Matsuzaka beef—these are the rare exception. With deflation and stagnant incomes, people have been looking for new ways to stretch their pay check for the last 10 years. This doesn’t just mean you can get stuff that’s ‘cheap for Tokyo’, there is plenty here that is CHEAPER than virtually anywhere else.  How about ¥100 for a beer at a restaurant? Or ¥190 for a sit down breakfast?

So if you live in Japan, there’s a good chance you already know a few places like this. So who exactly is Tokyo Cheapo for? Well, in the best traditions of all new sites like this, we plan to have something for everyone. If you’re visiting Tokyo, hopefully pretty much everything will be new and useful. If you’re staying for longer or living here we’ll have genuinely useful stuff for you too. We’ll be writing about a few quite specific areas and inviting contributions from others with expertise. For example, we’ll be looking at topics like cheap ways of doing business or saving on bank fees. Also, as much as we think we know what we’re talking about, there’s always someone out there who knows more, so hopefully it will be a chance to share some knowledge.

Suggested Activity
A Thousand Cranes: Tokyo Origami Workshop
According to Japanese folklore, folding a thousand paper cranes brings you good luck and happiness. Don't know how to fold a crane? This origami workshop is for you. You'll learn to fold more than the classic cranes in this friendly one-hour workshop. ...
Click here for details

Just to be straight up with our readers, we’re hoping to make some money out of this site for the considerable time we’ll be putting in to creating useful content. This also means we’ll eventually be able to offer some kind of reward to contributors and hopefully start a snowball effect of good content.  One thing we won’t do is put in advertorial content or otherwise compromise editorial content. **October, 2014 clarification**: Tokyo Cheapo does and will continue to use affiliate links on the site which pay us if a reader clicks through and purchases something. However, we won’t include something just because we think it will be profitable for us. We stand by the value of anything linked with an affiliate link and we will continue to cover businesses both with and without affiliate programs. We will also seek out deals for our readers which we’ll clearly identify as special promotions for cheapo readers. For some of these, we’ll receive payment, for others we won’t.

We welcome feedback either direct or through the comments and we’ll try not to censor or restrict the conversation unless you’re being defamatory or otherwise being an arsehole.