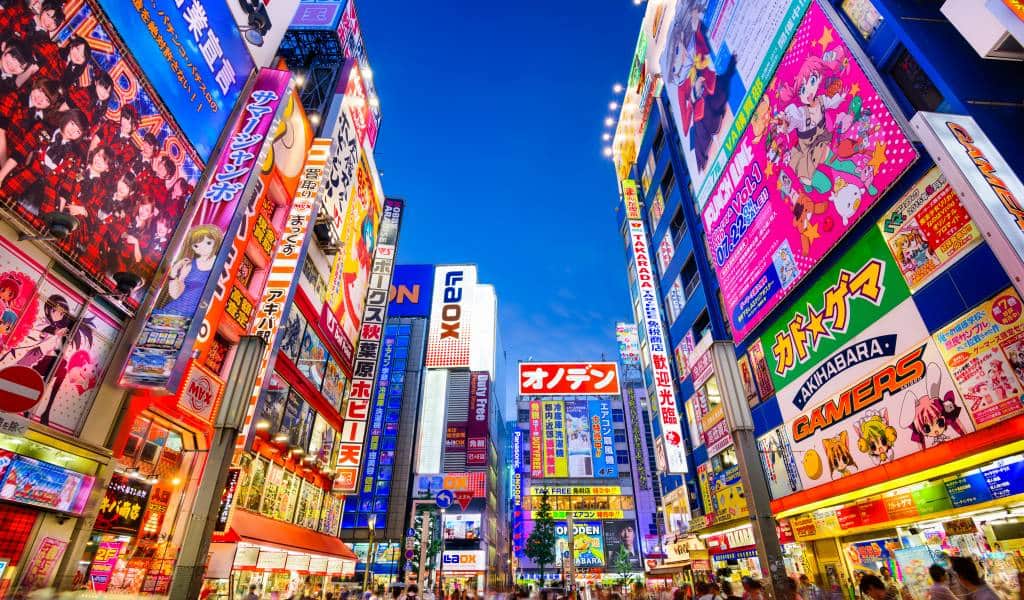 Akihabara — often abbreviated as Akiba — is among the most internationally famous neighborhoods in Tokyo. As you probably already know, it is THE place to go for all kinds of geekery. Akiba has the highest concentration of manga, anime merch, and maid cafes you can find in any one place on earth (not even an exaggeration). Also: electronics shops, arcades, and go karts (probably).

Akihabara is in central Tokyo and part of Chiyoda-ku. While Akihabara is the name of a train station and the colloquial name for the neighborhood around it, you won’t see it listed in addresses. Most places in Akihabara have a Soto-Kanda address (or some kind of Kanda-adjacent address).

Akihabara feels like a Tokyo fever dream. It’s dense, built-up, and crowded (like much of central Tokyo) but has added touches like: whole blocky buildings in bold primary colors; advertisements for virtual idols that stretch several stories high; and a clanging soundtrack courtesy of the numerous arcades, pachinko parlors, and discount electronics retailers in the area.

What is Akihabara known for?

Akihabara is famous as a destination for fans of anime, manga, video games, and idol culture. Before that, it was known as the place to shop for discount electronics — in fact, Akiba’s original nickname was “Denki-gai” (“Electric Town”).

Akiba is one of those Tokyo neighborhoods that is a whole culture unto itself. Beyond the ubiquitous merch shops, the neighborhood is known for: gatchapon (capsule toy machines), regular-looking vending machines that sell things like bread in a can, and maid cafes.

Maid cafes are cafes where the wait staff dress in maid outfits. Specifically, those kind of ~sexy~ “French maid” costumes normally seen on Halloween. Maids (cute, sexy, demure, or otherwise) have long been popular characters in manga and anime. Somebody had the clever idea to open the first maid cafe and then it became a whole THING that has lasted for like two decades. Initially the cafes were otaku haunts but now they are popular tourist attractions. We have a whole primer on them here.

Is Akihabara a good place to stay?

Akihabara is centrally located, with good transportation access to points around the city. There’s a pretty good selection of business hotels and capsule hotels in Akiba, and also in nearby neighborhoods like Kanda and Ochanomizu. If you plan on spending a decent amount of time in Akiba, then staying here makes sense. (Otherwise it probably makes more sense to stay elsewhere).

And if you want to have your fill of geek in the sheets, too…don’t get any weird ideas and stay at a manga cafe. Believe it or not, they’re a good place to turn to if you need a roof over your head. Side note: these establishments aren’t Akiba-exclusive, you can find them elsewhere in Tokyo.

What to see and do in Akihabara

Akiba doesn’t have sights in the conventional sense. It’s more of a vibe, and a place to dig deep into the world of anime, manga, gamer, and idol fandom. True fans of all things otaku should skip the mainstream spots and check out Akihabara’s hidden gems instead.

Or consider booking a guided tour. This one is geared towards geeks and gamers, and includes a visit to a maid cafe.

Even if anime stuff isn’t your cup of tea, there are plenty of things you can do to enjoy this area for free (anime lovers can too, of course).

Not (yet!) a fan of anime? Read our Non-Anime-Fan’s Guide to Anime.

Another thing you can do in Akihabara that is really popular is to join a go-karting tour. It’s like a real life version of the iconic video game by a certain Japanese company that we cannot name for legal reasons.

When is the best time to visit Akihabara?

Sundays. This is when Chūō-dōri — Akiba’s main drag — is closed to vehicular traffic creating what is called in Japanese a hokosha tengōku (literally “pedestrian heaven”).

Where and what to eat in Akihabara

Akiba is known for comfort food; think: ramen, tonkatsu, and curry. There are small, family run shops but also plenty of love for the chains — like Go! Go! Curry and Kyushu Jangara Ramen — here.

Eating on the cheap is easy in Akiba. A convenient place to find lots of affordable food options is the 8th floor of the super-sized Yodobashi Akiba store.

If you plan on going to a maid cafe, you might as well make that one of your meals. The food is generally not good; however, the maids often do cute things like make ketchup art on your omurice (omelet over rice). Also, the parfaits are usually very extra.

Maid cafes are also not the only kind of theme cafes in Akihabara: for example, Little TGV is a model train-themed café (where the wait staff dress like ero kawaii — “sexy cute” — conductors).

Nightlife and entertainment in Akihabara

Akiba doesn’t have a big reputation for nightlife; however, many of the maid cafes and arcades stay open until 10 or 11 p.m. Several of the major karaoke chains have branches here, including Pasela, Big Echo, and Karaoke-kan.

Shopping (or just looking) is pretty much the main reason to visit Akihabara. Shops here tend to fall into two categories: electronic stuff and fandom stuff.

On the electronics side: Yodobashi Camera, Bic Camera, and Laox are among the major retailers. All of these allow duty-free shopping, so bring your passport; there’s usually English and Chinese speaking staff, too.

There are also smaller shops where you might be able to find better prices. Akibaoo is a fun local institution; there are several small outlets around Akiba, each specializing in something different.

And for manga, anime, and cosplay supplies (among other things), Mandarake, Animate, Kotobukiya, and Lashinbang are some of the well-known spots.

For lesser known and secret spots, check out our guide to Akihabara beyond the popular attractions; or better yet, book a deep Akihabara tour.

Just a word of warning: some shops (especially on the upper floors) in Akiba cater to ~adult~ tastes, which might prompt some awkward conversations if you’re visiting with, say, your kids (or your parents).

Transport to and from Akihabara

Akihabara Station is easy to navigate. Take the “Electric Town” exit for the main area.

Getting to Akihabara from Narita Airport

The best way to get from Narita Airport is to take the Keisei Skyliner to Nippori and transfer to the JR Yamanote for Akihabara. The journey takes about an hour and costs ¥2,730.

A cheaper option is to take the Keisei Main Line instead of the Skyliner. This costs only ¥1,250 but takes around 90 minutes (or longer if you don’t take a limited express train).

Getting to Akihabara from Haneda Airport

Getting to Akihabara from Tokyo Station

Lots of things! Ueno and its attractions are a 15-minute walk away (or two stops on the Tokyo Metro Hibiya line).

You can also hop on the JR Sōbu line and travel two stops in one direction (west) for Tokyo Dome City (station: Suidobashi) or in the other direction for sumo mecca Ryōgoku (station: Ryōgoku).

Or visit as part of our Cheapo 1-day Tsukiji, Asakusa, and Akihabara itinerary.

All Articles about Akihabara
Do you want all our best tips on Tokyo? Download our ebook guide!

Things To Do in Akihabara

More Things To Do

Getting Around in Akihabara

More Tokyo Hotels
Do you want all our best tips on Tokyo? Download our ebook guide!